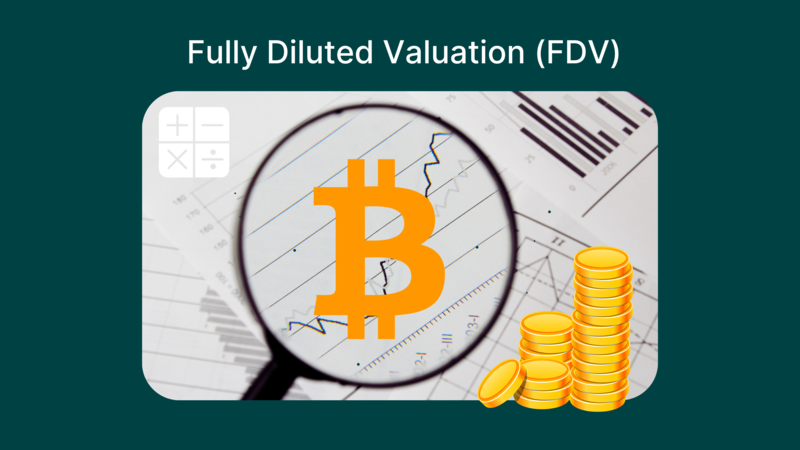 How much a cryptocurrency project’s token grows in value is a function of its technological and marketing progress. The general idea is that a technologically far-reaching project is well on its way to exponential growth. While this might be true, the token generation and distribution scheme as well as other factors contribute tangibly to this progression, all of which could potentially hinder this progress if not done well.

An increasing token supply might offset the demand and supply conditions. When the supply increases against an unchanged demand, a decrease in price per token could occur as a result of new tokens diluting the total market cap. To stay ahead of this situation, a project’s fully diluted valuation (FDV) is an important data to consider…

What is Fully Diluted Valuation (FDV)?

Fully diluted valuation is a statistical representation of the maximum value of a cryptocurrency project, assuming all of its tokens are already in circulation. It gives investors a view of the project beyond the given point.

The practice of releasing a small portion of the maximum supply of its token at launch is becoming more popular in the crypto space. With a relatively small number of tokens in circulation, these projects are presumed to be ‘undervalued’ considering the current market cap and fundamentals. 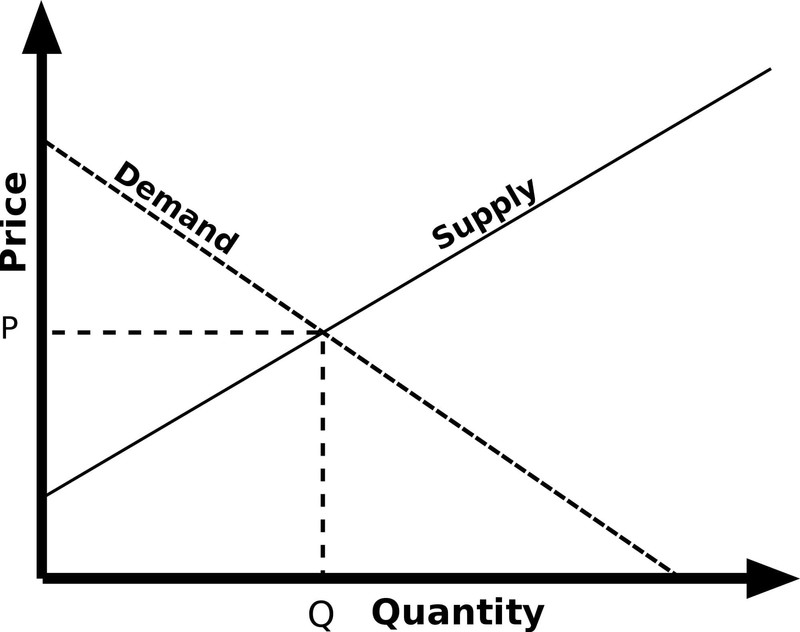 As more and more tokens are released and introduced into the market, the value per token may start to drop if there isn’t a relative increase in demand. Investors who fail to consider these future supply changes might suffer losses as more tokens are sold into the market. The FDV is a simplified mathematical expression that presents data that averts this scenario.

How to Calculate Fully Diluted Valuation

A cryptocurrency project’s fully diluted valuation is obtained by multiplying the current price per token by the token’s maximum supply.

The maximum supply includes the tokens that are in circulation and the tokens pending distribution. Essentially, it is the maximum number of coins coded to exist in the lifetime of the cryptocurrency. It is comparable to the maximum number of issuable shares in the stock market. The fully diluted valuation gives a projection of the cryptocurrency’s market cap assuming all tokens are in circulation.

For instance, the value of each EVMOS token is $2.70 (at the time of writing), and the maximum supply is 1 billion tokens. Taking this into consideration: 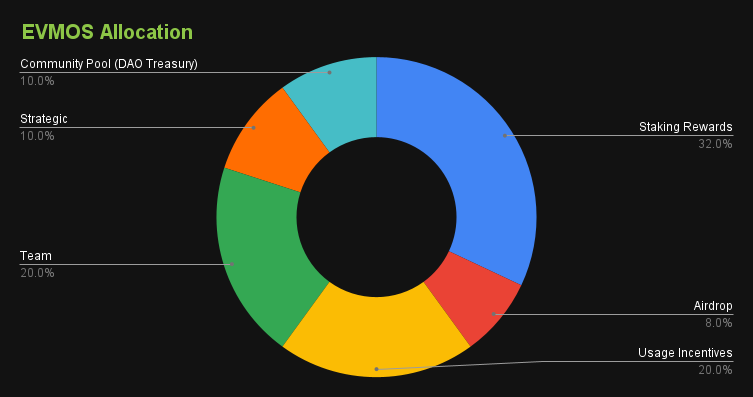 The information from CoinGecko’s EVMOS tokenomics page shows various token allocations including 32% of the total supply reserved for staking rewards and another 8% allocated for the EVMOS Rektdrop program (token airdrop). Some of these allocations are still vested and will be released in the future.

Staking rewards are claimed over time by users who staked their tokens on the platform. As stakers claim their rewards, the supply of tokens will increase as more tokens are brought into circulation. The Rektdrop program runs until 30th September 2022. During this time, eligible members can claim tokens allocated to them, the circulating supply will increase as this happens. 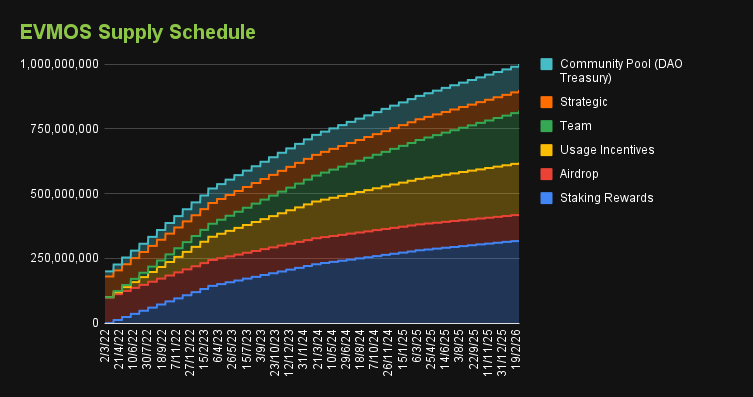 The supply schedule above gives a view of the complete token generation and distribution timeline. The market cap doesn’t take the vested tokens into account. If the total supply was already in circulation and the price per token stayed the same, the market cap would vary considerably from the current figures. This is reflected in the fully diluted valuation (over $2.6 billion) shown on CoinGecko’s token page. 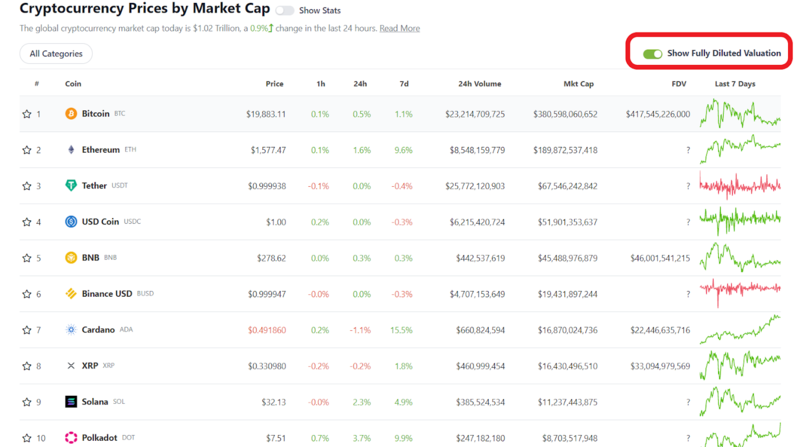 For some cryptocurrencies, there are no FDV statistics because these tokens do not have a max supply. 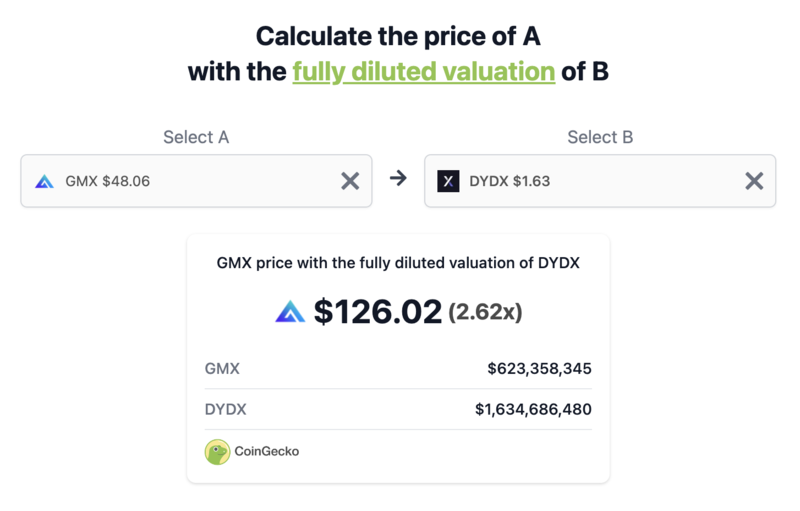 How do two cryptocurrencies compare in terms of valuation?

CoinGecko also has a coin comparison feature that allows investors to compare the FDV (and market cap) of two cryptocurrencies. Investors can compare projects in the same sector or related sectors, and use the statistics to estimate the potential of a cryptocurrency project.

Fully diluted valuation and market cap (short for ‘market capitalization’) share some similarities as well as some differences from each other.

Let’s take a look at the mathematical differences between market cap and FDV:

When a project’s tokens are entirely in circulation and tradable in markets, the token’s maximum supply equals to circulating supply. In this case, the FDV and market cap share the same figure.

In contrast, the FDV gives a hint about the expected future value. Projects with a relatively small market cap could have most of their tokens vested and scheduled to be released soon. FDV statistics show what the project’s value would have been if these tokens were released (ignoring the demand variable).

Investors are left to decide if the project deserves this projected value.

When used properly, FDV is a helpful metric for investors to gauge the performance of a project with respect to its tokenomics. Depending on the token release schedule, it could take several months for vested tokens to be released into circulation. Investors who hope to hold on to their investments through this time should consider how much effect this new supply will have on the value of the price of each token.

In a usual scenario, cryptocurrency projects present a comprehensive detailing of their tokenomics. Data included in tokenomics presentations include the token’s maximum and circulating supply, distribution information for circulating tokens, and future release plans. Each of these data is vital and reflects on the project’s valuation.

Is the cryptocurrency project undervalued or overvalued? To derive a realistic valuation for any project, an investor should consider the project’s use cases and quality of products, the current market cap, and the fully diluted valuation. This approach gives more reliable information on the project’s growth potential.

If the fully diluted valuation shows an unrealistic valuation, then there’s a high chance that the value per token will decrease as more tokens get unlocked. In a case where the project has strong fundamentals, and the token release plan is sustainable, the FDV is presumably more realistic.

However, whether the FDV figure is realistic or not is a mere presumption and may have a wide error margin. Investors are advised to do their own research while making investment decisions using FDV or market cap.

Read this article on cryptocurrency tokenomics to learn what to look for in a project!

Joel loves discussing cryptocurrency and blockchain technology. He is the founder of CryptocurrencyScripts.
Follow the author on Twitter @agboifesinachi

The Crypto.com DeFi Wallet to Back The Merge