According to the BetaMars official (www.betamars.io), the BetaMars Squad Deathmatch will be held during March 16 – March 27. Players need to sign up as a team and get test access for each address in team. In the Squad Deathmatch, strategies should be made to run the Land NFT, the infrastructure in BetaMars, to increase the total land revenues. This time, BetaMars will rank the average daily revenue of Land NFT in the match. The higher the Land NFT’s daily revenue, the higher the ranking. Top 3 teams will share the 20,000 project token EP. 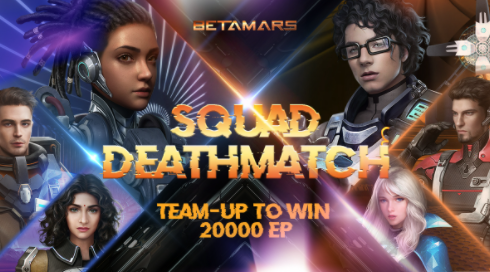 At present, BetaMars is in the second closed beta test of 1.0 version. Players can work in the Land NFT to experience related features to earn revenues. The Squad Deathmatch is a good opportunity for players to study the BetaMars 1.0 gameplay and rules and set up strategic combos to earn more. BetaMars stated that the revenues does not only rely on the individual effort but also cooperation and teamwork. The competition aims to inspire players to explore more applied strategic combos by teamwork so as to prepare for the formal game to get revenues shortly and efficiently.

In the BetaMars game, there is a rich reward mechanism. A 55% of th e total project token supply will be out into the game pool for players. After the test ends, the game will be formally launched. On the day of the launch, 4.95 million project token EP is open for sharing by players!

BetaMars is a metaverse project integrating NFT, SLG, P2E, RPG, UGC and DAO. There are several versions of BetaMars. The BetaMars 1.0 is a resources distribution stage, with a combination of SLG and Play and Earn game model, giving players a game experiences while getting revenues. Land NFT is a vital infrastructure in BetaMars. In the 1.0 version, each Land NFT can be regarded as mining GPU. By working in the Land NFT players can earn project revenues.

BetaMars 2.0 will provide a metaverse game experience with high freedom, enterntainment and revenues by integrating SLG, RPG and UGC. In the 2.0 version, the application scenarios of the Land NFT will comtinue to be enriched. It will be linked to major mining farms to gain BTC and other mainstream coins. BetaMars metaverse civilization will be established based on the Land NFT.

A Dream Within a Dream: Movies, Metaphor, and the Philosophy of the Metaverse

The Magic Circle of Johan Huizinga | by William Meller | Dec, 2022

How Tokenization, AI and Web3 are Transforming the Digital Economy