One of the hottest topics of the emerging digital economy is also one of the most bewildering: non-fungible tokens (NFTs).

After all, NFTs are so technical, it’s easy to get confused and walk away. But, for those considering investing in this new type of digital asset, the Greenville Journal decided to do more than just write about it. We bought one for ourselves.

First of all, what is a non-fungible token?

Simply put, a non-fungible token is a piece of data — like a work of digital art. That’s it. Nothing more, nothing less.

But here’s the thing: In order to take and preserve the uniqueness of that work of digital art and thus ensure its value, someone has to take and digitally “mint” it using blockchain technology. 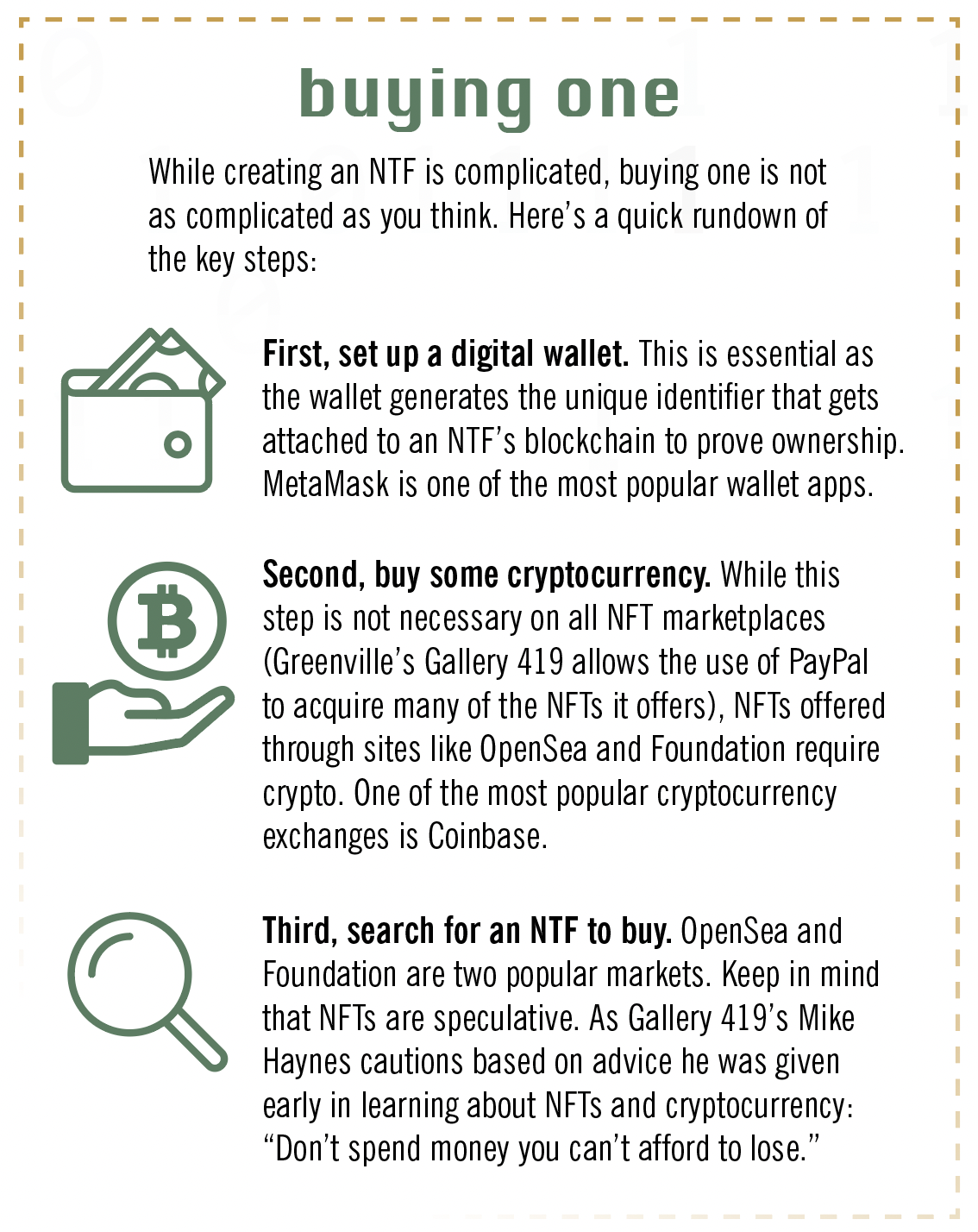 Ok, so, what’s blockchain? Blockchain is a highly-secure database that is distributed over a wide array of computer network systems, all that have access to the blockchain and whose users are notified anytime anyone makes a change to the original data. In other words, instead of there being one person in charge of all the data, everyone on the blockchain is in charge of all the data. And this makes it very hard for a hacker to sneak in and steal it.

So, in a way, blockchain is both highly decentralized and yet highly secure, which makes it both valuable and viable.

So, bring blockchain and cryptocurrency to the table, you’ve got a space where NFTs can grow.

One of the areas NFTs are becoming more common is in the creative arts. Greenville’s Mike Haynes is co-founder of Gallery 419, an online-only gallery representing a growing number of local artists whose eyes are opening to the potential income streams offered in the NFT space.

He likens his gallery to the early days of e-commerce, when brick-and-mortar businesses first understood the power of the web to sell more of their goods and services and yet, didn’t know how to make it work. He says it’s no different with today’s artists — they see the potential but lack the technical understanding. And that’s where he comes in.

One of those artists is Nick Baldridge, who recently began creating a series of digital art based on the associations of color with the eight primary emotions. The collection will eventually include hundreds of combinations of color and emotion, and each piece is destined to become an NFT.

Community Journals recently sat down with Baldridge and acquired one of his works entitled “Joy.” The process involved a Macbook computer, an iPad and a digital wallet (required to trade in NFTs). It took less than 30 minutes for Baldridge to “mint” his artwork, that is, to assign the work a unique blockchain identity, and to transfer the resulting NFT to Community Journals.

The digital wallet is necessary because that is what produces the unique identifier that gets attached to an NFT’s blockchain to prove both who made it originally and who owns it.

Baldridge explains that by making his original artwork NFTs, he will receive a small percentage from each transaction any time one of them is sold. Haynes says this aspect is one of the driving forces behind artists turning to the world of NFTs. 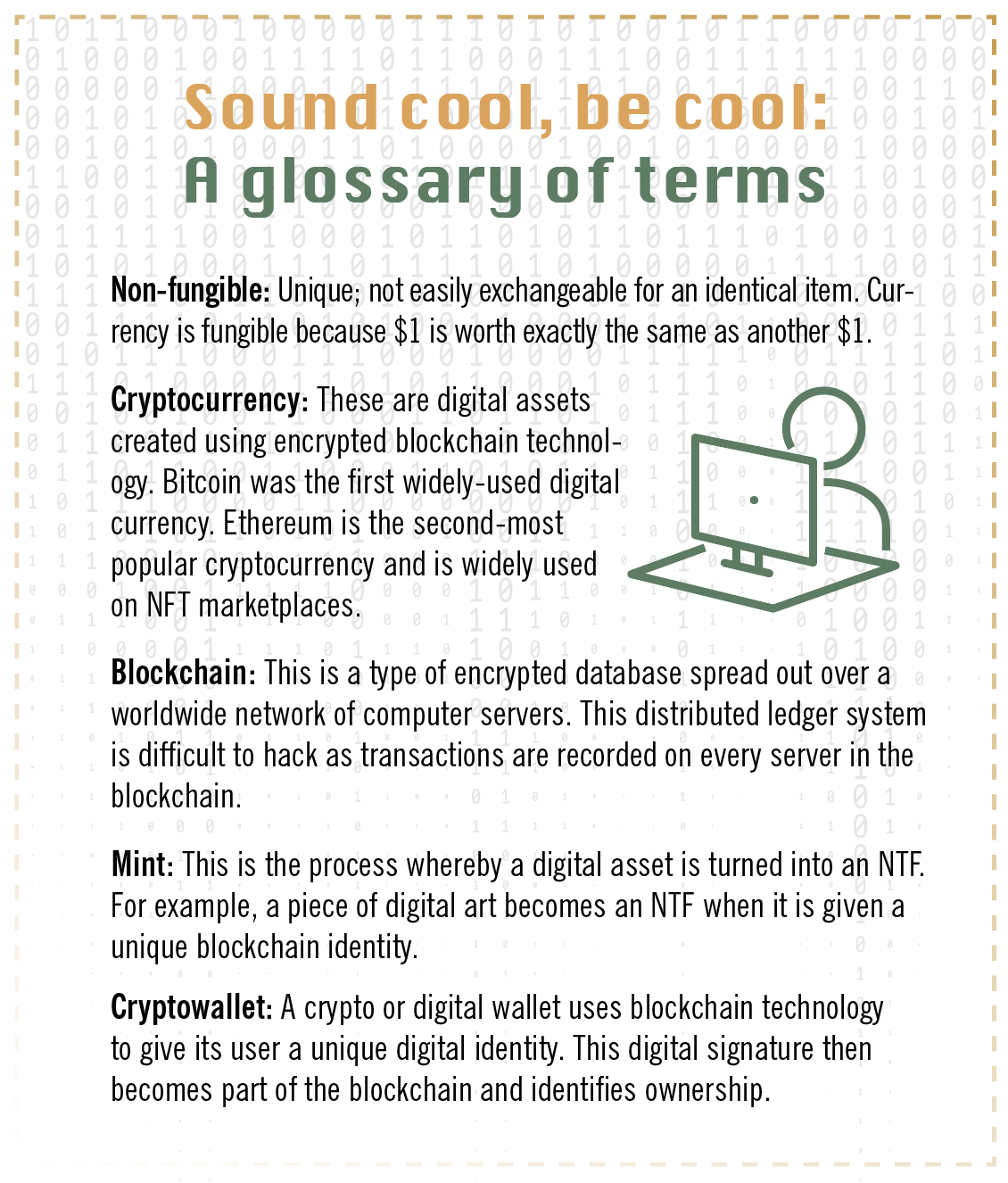 “As I talked to artists that seemed to be the thing that really lit their eyes up,” Haynes says. “I think that’s pretty exciting.”

Dylan Flasky, an NFT marketing consultant in Greenville who is working with Baldridge on another project, says the world of NFT art is growing explosively.

“People are looking for the artists they really believe in,” Flasky says.

As an example, he points to Foundation, an NFT art auction site that in the past six months grew from about 6,000 collections to more than 15,000 today. Flasky explains that one of the things driving excitement about the emerging NFT art market is finding artists who, in 50 or 100 years, will be considered the digital equivalent of a Picasso or Warhol.

This highlights one of the fundamental challenges in assessing an NFT as an investment: how do you determine its value?

Do NFTs have a future?

NFTs are such a recent phenomenon that assessing their staying power is difficult at best, says Clemson University economics professor and BB&T scholar Jerry Dwyer, a former vice president of the Federal Reserve Bank of Atlanta and founding director of the Center for Financial Innovation and Stability.

“I think [NFTs are] unexplored territory,” Dwyer says. “Where it’s going to go and whether it’s a passing fad remains to be seen.”

He says NFTs are highly speculative and while some are being sold for millions of dollars, the vast majority do not sell or sell for prices barely high enough to cover the cost of their creation. The issue comes down to collectibility, he says.

For the sake of comparison, Dwyer points to the world of cars. The very first car off the assembly line would be more valuable to collectors than the second or subsequent models, even if they are identical, because it was first.

Dwyer also says an NFT’s uniqueness is also an important consideration. By the same token that a collectible like a car might have its value augmented by being owned by someone famous or notable, an NFT could gain value in the same way. The difference is the NFT’s chain of ownership is recorded in its blockchain.

“Why would someone pay money for this?” Dwyer asks. “’Some people care [about who owned it] and some people don’t,’ is the answer.”

Haynes says despite the fascinating and potentially confusing aspects of NFTs, the fact remains: Something’s only valuable if someone else is willing to pay for it.

“It could be the best piece of artwork in the world, but if no one wants to buy it, it’s worthless,” he says.

While creating an NFT is complicated, buying one is not as complicated as you think. Here’s a quick rundown of the key steps::

Non-fungible: Unique; not easily exchangeable for an identical item. Currency is fungible because $1 is worth exactly the same as another $1.

Cryptocurrency: These are digital assets created using encrypted blockchain technology. Bitcoin was the first widely-used digital currency. Ethereum is the second-most popular cryptocurrency and is widely used on NFT marketplaces.

Blockchain: This is a type of encrypted database spread out over a worldwide network of computer servers. This distributed ledger system is difficult to hack as transactions are recorded on every server in the blockchain.

Mint: This is the process whereby a digital asset is turned into an NFT. For example, a piece of digital art becomes an NFT when it is given a unique blockchain identity.

Cryptowallet: A crypto or digital wallet uses blockchain technology to give its user a unique digital identity. This digital signature then becomes part of the blockchain and identifies ownership.