Since it launched in March of 2021, the token that powers Anchor Protocol has moved mostly in line with the values of other big coins. That means it’s a good bit off its all-time high. However, that could just mean that now presents a buying opportunity.

But before we get into why we like the Anchor Protocol token, let’s look at the underlying tech behind it. Anchor Protocol offers lending and borrowing services. Using this service, those that hold stablecoins can lend them to Anchor Protocol. These tokens can then be leant to borrowers. And in return for the effort, lenders can be rewarded with up to a 19.49% annual percentage yield (APY) on what they loaned.

In other words, Anchor Protocol offers a simple and stable way to make gains from crypto in an otherwise choppy market. Here’s how it works… 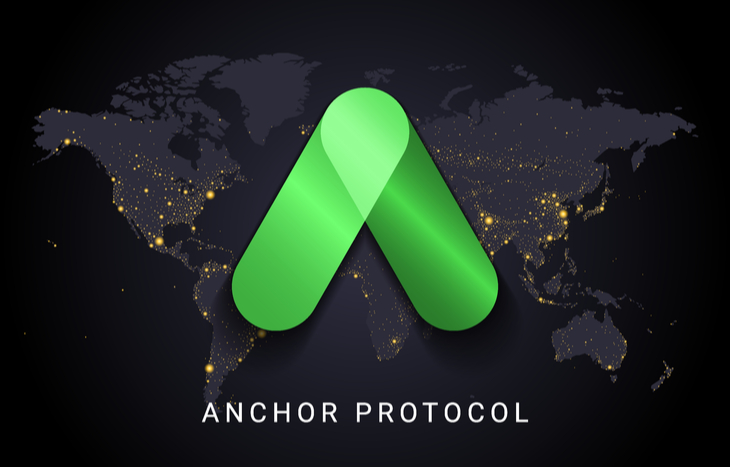 Anchor Protocol was created by Terraform Labs. This South Korean fintech company was also the brains behind the Terra layer-one blockchain. As such, this protocol utilizes several coins that live on Terra. Most notably, there is TerraUSD (UST), and Terra crypto (LUNA). To take advantage of the Anchor Protocol, lenders deposit the TerraUSD stablecoin. This provides liquidity for the lending protocol. And in return, those lenders can reap a 19.49% APY.

On the borrower side, users of Anchor Protocol can turn their LUNA collateral into other more productive assets… All without giving up control of the actual token. It essentially works like a money market account. Just in the world of decentralized finance (DeFi).

There are lots of lending protocols in the crypto space already. Goldfinch protocol is one of the newest and most noteworthy competitors in the space. However, where the two differ is in the need for collateral. Goldfinch has shirked the standard collateral-based lending method. It operates without the need for collateral. In this case, holders of the governance token get to vote on whether a potential borrower is worthy.

In the case of Anchor Protocol, risk is averted through the use of collateral. That being said, this can stymie access for some potential borrowers. However, this insulates Anchor Protocol against risky lending losses. And this is what keeps those annual percentage yields for lenders so high.

But again, this isn’t a completely unique product in the world of DeFi. There are several other notable money market protocols out there. Aave and Compound also come to mind. However, neither of these can compete with Anchor Protocol streamlined interface. And it’s equally simple to use on both the lending and borrowing side.

If you have a Terra-compatible digital wallet and a stake in either UST or LUNA, you’re ready to go. You just need to connect said wallet and the rest is simple. And once you connect your wallet, there’s even a simple link on the Anchor Protocol interface where folks can easily buy UST.

Here’s Where ANC Enters The Picture

Anchor Protocol crypto (ANC) is the native governance token of the protocol. This token can be staked in order to receive voting rights on the protocol’s future. Furthermore, borrowers that bond their LUNA tokens also receive ANC tokens. For this time being, this is akin to a freebie in order to expand adoption. And Anchor Protocol has been somewhat stingy with the amount of ANC that’s been released so far.

The total circulating supply of ANC is just over 265 million. So a little more than a quarter of the total supply of ANC has been released into the wild so far. Here’s how that distribution is broken down:

As you can see, borrowers are poised to get the lion’s share of distributed ANC. And the more folks that find themselves with this token on-hand, the more worthwhile it will become. It’s also worth noting that Arrington XRP Capital, Pantera Capital, Galaxy Digital and BlockTower Capital all saw a lot of potential in Anchor Protocol. These four firms have invested more than $150 million into the protocol.

The Bottom Line on Anchor Protocol

Anchor Protocol serves an important role in DeFi. It takes age-old lending strategies and applies them crypto. This is a perfect example of worthwhile use case in the world of cryptocurrencies. There are no banks or government oversight. It’s simply a decentralized method of lending. One where both the lender and borrower can make the most out of their transaction.

Because Anchor Protocol is barely a year old, it still has some maturing to do. But it’s already got the hard part out of the way. Its user experience gets high marks. Now it just needs to step up the marketing. As more people learn of Anchor Protocol, we have little doubt it’ll gain more users. When that starts to happen, ANC is likely to double in price. But that could take a while.

As a buy-and-hold asset, there’s a strong case for ANC. The Anchor Protocol it powers is simply top-notch. But crypto borrowing programs are still relatively new. Despite the fact that crypto loans skyrocketed by more than 1,900% last year, they’re far from mainstream. But that’s unlikely to be the case for much longer. Cryptocurrencies are finding their way into nearly every corner of the globe. And lending services like Anchor Protocol are likely to follow suit. In the long run, we expect to see ANC competing with Aave and Compund in terms of value. But that’s likely to take several years.

Matthew Makowski is a senior research analyst and writer at Investment U. He has been studying and writing about the markets for 20 years. Equally comfortable identifying value stocks as he is discounts in the crypto markets, Matthew began mining Bitcoin in 2011 and has since honed his focus on the cryptocurrency markets as a whole. He is a graduate of Rutgers University and lives in Colorado with his dog, Dorito.

These top cryptos are ready to explode