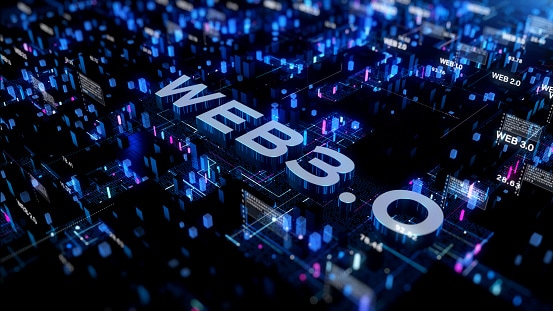 Web 3.0 is considered the third version of the internet.

If the number of investments and the accompanying buzz are considered, Web3 or Web 3.0 is clearly the future of the internet.

Web 3.0 is considered the third version of the internet. A 2020 Twitter post described the three iterations of the Web in these words:

Web 1.0 was ‘read-only’, with a static website having almost zero user interaction. Present-day Web 2.0 is a ‘read-write’, epitomised by the rise of social media and user-generated content. Web 3.0 will be ‘read-write-own’, as it will help secure data.

Raj A Kapoor, founder and CEO of India Blockchain Alliance, elaborates how data is secured on Web 3.0: “When we use a platform like Facebook, our data is collected, owned, and monetised by them. In Web 3.0, our data is stored on a crypto wallet. We engage with apps and communities on Web 3.0 through our wallet. We can also take our data with us when we log off.”

Data security on Web 3.0 will be possible due to blockchain technology. Blockchain will help keep information on Web 3.0 organised in the form of blocks. These blocks are immutable and validated by a consensus through asymmetric cryptography like keys or digital signatures. Thus, users can access resources, applications, agreements, and content with greater security.

Mr Kapoor adds that Web 3.0 will enable data privacy as a crypto wallet isn’t easily linked to someone’s real identity. “While someone might be able to see the activity of someone’s wallet, they won’t know that it’s your wallet.”

While Web 3.0 is expected to streamline ever-growing crypto transactions, newer use cases are likely to emerge out of it.

If Web 2.0 is currently about the virtual world, Web 3.0 is about bridging the gap between the virtual and physical worlds. The ‘bridges’ between the two worlds are several 21st-century technologies like Artificial Intelligence, Augmented Reality, Virtual Reality (all three are the cornerstone for metaverse), etc., that Web 3.0 can host.

“Brands across sectors are adopting Web 3.0 to offer personalised, superior customer experience in the immersive world. Gamification and marketing are the two prominent Web 3.0 use cases which cut across domains,” adds Sharat Chandra, Vice President, Research and Strategy, EarthID.

If the recent Chainalysis report is to be believed, blockchain-powered metaverse, VR and NFTs (Non-Fungible Tokens) will rule Web 3.0. In particular, as noted by the report, gaming is likely to grow exponentially in the Web 3.0 ecosystem.

Powered by blockchain, Web 3.0 gaming is also called play-to-earn or play-to-own gaming. In Web3 gaming, NFT assets are owned by the players. They can be sold, too – something impossible in Web 2.0 Chainalysis, quoting a DappRadar report, says that blockchain-based gaming activity has increased 2,000% since 2021.

In another significant development, which will change how people play games and operate on Web 3.0, several Web 3.0 firms have teamed up to create the Open Metaverse Alliance of Web3 or OMA3. This alliance aims for a “metaverse without restraining walls, where individual platforms are interconnected and fully interoperable.”

The launch of OMA3 – a DAO with ‘inclusive, transparent, and decentralised governance’ – also signals Web 3.0 role in converging different elements of metaverse and blockchain technology.

While Web 3.0 is positioning itself as the future of the internet, there are a few red flags too. Primary among them is ‘decentralisation’ – the main premise of Web3 itself.

Decentralised Finance (DeFi), a by-product of blockchain technology, is a cause of concern too. The Chainalysis report states that DeFi protocols became the go-to target for hackers looking to steal crypto in 2021.

Money laundering via DeFi is another issue. “So far in 2022, DeFi protocols have become the biggest recipient of illicit funds, taking in 69% of all funds sent from addresses associated with criminal activity,” the report says.

Crypto Mining Profitability | How to Make Money with Mining in 2022

5 Lessons From the Stunning Implosion of SBF and FTX

Is the Rocketize Token a Strong Enough Smart Contract Crypto Project to Outperform Bitcoin and Cardano?

Dogeliens Appears As A Silver Lining As Bitcoin and Solana Plunge